Symbols and icons are all around us, from instructions on an appliance to signs in foreign airports. They give us immediate information which may otherwise be too difficult or time-consuming to access. A road sign in text, for example, would be useless for someone who could not read the language and too time-consuming to be safe for someone who could.

Symbols are similar to icons, but are able to convey a much broader and more varied level of meaning. Icons are a visual key used to access a single piece of information and work in isolation from one another. They may have a design which can convey a layered meaning, for example a road sign within a red triangle is a warning and a red circle with a line through is a prohibition, but they cannot be used to convey anything more than basic information.

Pictures have the opposite problem to icons in the sense that they can convey too much information which confuses the intended meaning. Pictures are, by their very nature, open to interpretation and although a symbol may look like a picture at first glance, there is a great difference. A symbol has a single, simple and defined meaning whereas the picture below could have multiple interpretations. For example the lady could be happy to find her favourite book, enjoying working as a librarian, or reviewing opinions of people in the library. 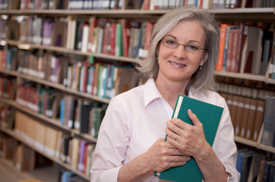 Symbols are designed in large sets with a consistent visual structure covering a wide vocabulary. This means they can be used in combination to express a near infinite range of meaning. Symbols can convey basic information in the same way that icons do, but by combining them, much more complex information can be conveyed.

Pictures and illustrations are useful to set a scene, and symbols give an accurate interpretation of the intended meaning, so they work well when used together.

Symbols also support learning and communication by helping someone to visualise a meaning. This is especially useful when considering concepts that aren't visual, such as voltage and current, as shown below.

It is much easier to understand and remember voltage and current by using symbols. A person can recall the meaning using visual memory as well as semantic (or knowledge) memory. Using this 'doubling-up' of recall makes learning concepts much easier for everyone, especially those who have certain forms of learning difficulties.