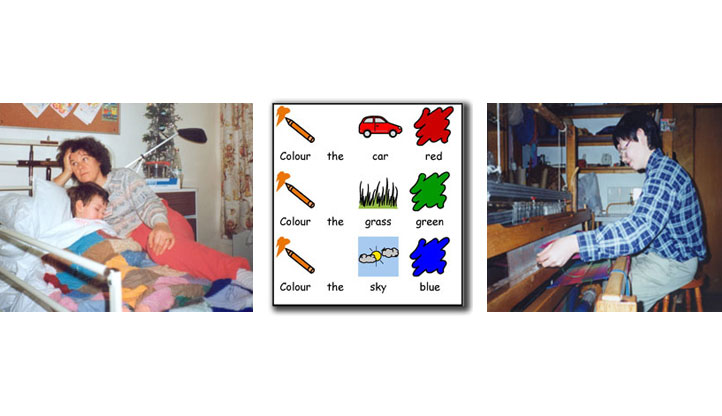 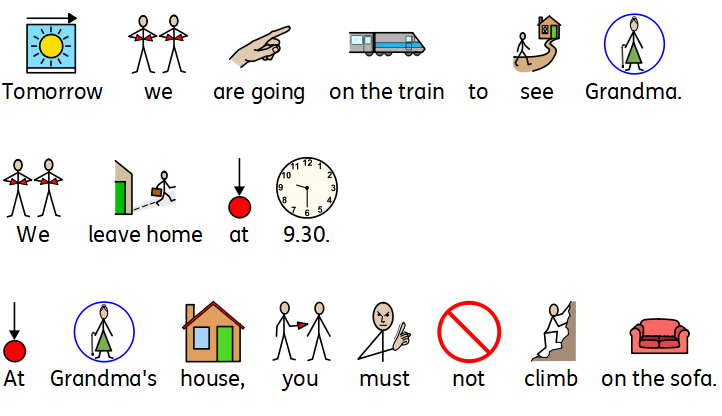 My son, Andrew, was seven-years-old when he became ill with encephalitis. Encephalitis is inflammation of the brain, usually caused by a viral infection...

The virus destroyed the area of his brain that holds language in order for it to be processed; consequently, he developed a problem with language comprehension.

Even a word such as 'caravan' caused him difficulty, as he lost the first syllable 'car' by the time he heard the last syllable, 'van'.

Various methods were tried at home and school to help him with his comprehension. One teacher would record commands onto an audiotape so that he could listen and rewind until he grasped the message. An example would be "Colour the car red".

However, providing a pictorial representative was found be much more helpful, as Andrew's visual memory was not only unaffected but above normal.

Following an assessment, the programme 'Writing with Symbols' was suggested.

'Writing with Symbols' was used by home and at school from the age of 11 to 19, when he left school.
At home, I found it invaluable in explaining to Andrew what we were doing, where we were going and, most importantly, how he should behave. At school, it was used in all lessons to give instructions and provide explanations.

Although Andrew has learning difficulties, he is very able – especially with tasks that are visual and hands-on. He attended a Camphill School, which has a very craft-based curriculum and is an expert weaver and basket maker.

Andrew is now 25. He has recently moved to a new Camphill Community and I'd like to introduce his new placement to symbol software. His household recently went on holiday to France and had to be up at 3am to catch the plane. Andrew relies on structure to be aware of what's expected of him and this completely threw him. As a result, he was difficult for some days and there was an increase in his epileptic seizures.

I had been considering for some time that his new home would benefit from using a symbol programme and this episode persuaded me to take action.

'InPrint' will provide the tools we need to develop Andrew's skills and encourage participation in social activities which he finds difficult to engage in. It will also prevent further deterioration in general communication, which has been going downhill since he left school.